“Simon? No, he’s over the back there in the tower!” If you want to visit Simon Krasowski in Finkenwerder, you won’t have much luck at the Diehl Aviation headquarters on Hein-Sass-Weg. The Head of Digital Transformation very deliberately chose a workplace for himself and his young team outside of the company that employs them. You’ll find him and his current team of six colleagues in the HDW building right next to the Rueschpark ferry terminal, a tower visible for miles that has an unmistakeable 1960s feeling about it. The views over the Elbe are stunning. Together with his architect Siw Matzen, Krasowski tried to “make the most” of this initially unimpressive office. The result is an open room with graffiti, beanbags, bar stools and walls you can write on. And that represents exactly what Krasowski’s team wants to achieve here for Diehl: something new.

Why did they choose him for the “Digital Transformation” mission? He doesn’t quite know either, actually, Simon Krasowski jokes. Born in Gdańsk, he moved to Hamburg with his family as a six-year-old. He studied Industrial Engineering at the University of Applied Sciences in Wedel. “It’s a typical degree subject, good for everything and good for nothing,” he says with a grin. He was interested in working for Airbus, because the international context of the company fascinated him. No sooner said than done: during his studies he went to work for the aircraft manufacturer first in Bordeaux, and then at the head office in Toulouse to write his thesis. He returned to Hamburg and started work for Airbus here with various engineering and programme management jobs. But seven years on, at the site on Kreetslag, where many find their careers thriving, Krasowski knew that he wanted something different. In 2010 he moved to Diehl Comfort Modules, starting out in Customer Support, and in 2011 he took on responsibility for all customer projects as Programme Leader. There he had his first experience of a complete restructuring when his team was faced with the major production rate increase for all Airbus programmes. New processes were needed, and the staff had to be motivated. Finally, in April 2017 he was invited to take on the field of digital transformation, which also meant moving from operations to strategy. And if there had been any uncertainty before, it was now clear why he was the right choice to make the subgroup, with sites in Hamburg, Laupheim, Gilching and Ueberlingen, number one in digital cabin solutions over the next ten years. Change is what he does best. 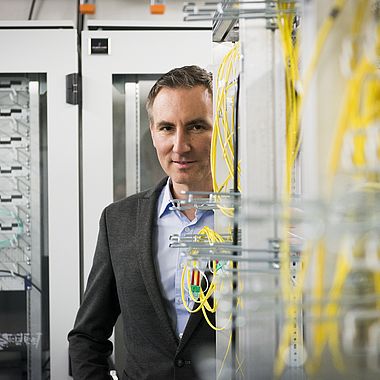 One of the “playing fields” relates to improving the production process by using modern technologies and digitalising analogue processes. Diehl wants to reduce its process times by 50% over the coming years. Krasowski explains that Diehl has called this process ‘Better Business’. At the first sites, personnel have already been retrieving their work plans digitally for some time now. Their skills are recorded on a workbench in the system, and the individual work order steps are assigned according to expertise.

Another area is focused on ‘New Business’. “For a long time, aviation was focused on itself, because the growth rate was so high that production was primarily from one order to the next. It wasn’t until around 2015 that we noticed how the digital transformation has taken hold in all areas of our life, when in other industries customer-centric business ideas were suddenly digging the ground out from under the feet of established companies.”  Speaking at the German Aerospace Regions Day in 2018, Krasowski described this shift using Nokia as an example: the story of the erstwhile king of mobile communications is one of astounding success and bitter decline. The company was once the globally dominant mobile phone manufacturer, but it underestimated the appeal of its agile competitor, Apple, and its idea for a smartphone. Nokia’s supremacy melted away, and the company rapidly slipped into insignificance. At the heart of ‘New Business’, accordingly, is a change of perspective for Diehl: “In recent years we have been very focused on the OEMs that are indeed our main customers. We now want to unlock the needs of other customers and users,” explains Krasowski. “We are currently working on an assistant to simplify the work processes for the crew in communication with the cabin,” he continues. In the long term, MRO customers who undertake retrofit installations of our products, as well, of course, as the passengers who use them on a daily basis, need to be just as much target groups of business division as the airlines. For passengers, for example, bookable cabin baggage lockers could be very interesting, according to the leader of the innovation team, which is to expand to ten colleagues in the coming months.

A relaxed team atmosphere is important to Simon Krasowski. Everyone is on first name terms, and former colleagues are honoured in a colourful photo collage on the “Wall of Fame”. Alongside Diehl employees, the taskforce also includes many students — of engineering, business administration and even psychology. “This escape from old ways of thinking is part of the culture change,” says Krasowski, identifying an important third pillar in Diehl’s transformation process. Establishing an error culture in the company’s thinking patterns is also part of it. “’First time right’ remains a prevailing creed in aviation. Quickly trying something out, adjusting and, if it isn’t sufficiently scalable, discarding it, is not really established yet,” explains Krasowski. “But in this complex world, those who still believe that they can succeed purely with existing solutions and approaches is going to get nowhere,” he concludes.

As motivated as Simon Krasowski’s team may be in its dedication to digital transformation, the team leader remains realistic. “Innovations for everyone are innovations for no one. If you want to make everyone happy, the end product will be of no use to anyone. That’s why we always look first at the specific problem, for example a worker’s problem, and at the individual solution.” Simon Krasowski is curious about how the transformation of the company will proceed in the years ahead. “When everyone understands that neither purchase price nor machine time is the measure of success, then we will be on the safe side,” he says. “The biggest challenge in implementing such processes is to give employees enough resources and enough freedom.” This, too, is a decisive aspect of culture change, according to Krasowski, who finds his own freedom on a yacht that he shares with colleagues. Trimming the sails together and then setting off — that is just his thing.

Digitalisation? It’s penetrating every aspect of aviation in Hamburg right now. But how, specifically, is it being implemented at Diehl Aviation? Simon Krasowski is bringing together the innovation processes that some departments had already tried out for themselves “on the quiet”, he explains. “Often, one team didn’t know about the idea that another team had. And that’s where this notion came from, to create a central playground for innovation,” he says, reflecting back on how the birth of his taskforce. “Of course there was some uncertainty back then about whether our “creative laboratory on the Elbe” was strictly necessary. We discussed it openly at all levels, and we decided in favour. The fact that everyone had a say definitely helped gain acceptance within the group,” the Head of Digital Transformation is pleased to report. “At first, we analysed our actual digital maturity at the individual sites. We then identified areas for action and then finally singled out individual topics, so-called ‘playing fields’.” When an innovation project starts, Krasowski’s team first works together with the responsible personnel in the departments to produce a single-page statement as to why this idea should be taken on. Ideas can be pitched at quarterly meetings of the so-called Digital Hub, Dieh’s innovation committee. If an idea gets through the pitch, it moves to implementation.