It's not that easy to get an appointment with Daniel Erdelmeier and David Kuestner. In Stade in the morning, in Finkenwerder at lunchtime, in Dubai or perhaps Mobile, Alabama, next week - the Synergeticon founders are on the road non-stop, meeting customers for their software. Mostly, they do stuff together - just like this interview. In negotiations, they sometimes realise that they are far and away the youngest people at the table. "But if there is any doubt, it vanishes when we get started," David Kuestner is happy to report. "It's good to be underrated," Daniel Erdelmeier adds. "It makes for a bigger surprise."

Kuestner, 30 years old, and Erdelmeier, 31, have a tale of success behind them - a tale that goes to show that the digital startup spirit is not only at home in California. Even if the story of their company did begin there. But first things first: Already as students at RWTH Aachen the passionate programmers were writing software to support users. They started out with quality management software for pharmacists. "My parents are both pharmacists, so it was somehow natural to start there. Unfortunately, there wasn't so much demand," explains Daniel Erdelmeier. He was born in Chicago but grew up in Karlsruhe and studied aerospace engineering. David Kuestner grew up between Cologne and Bonn. He studied industrial engineering and came within a hair's breadth of ending up in textile production engineering. "I already had a job on offer in Tokyo, but it just didn't appeal to me," he says. 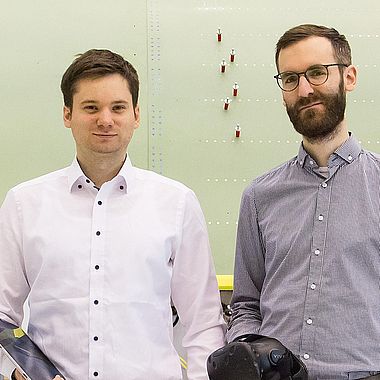 They were both big aviation fans, though, and so they ended up doing an internship at Lufthansa Technik in Hamburg. And they saw something there which they just couldn't get out of their heads: Measurement and maintenance processes were still paper-based, unlike, for example, in the automotive industry.

What's more, they realised that there was a massive loss of information in communication between process players thanks to the very analog steps being taken. It was like a children's pass-the-message game being played in the workshop. When the time came to work on their major projects to finish their degrees, Kuestner and Erdelmeier packed their bags and went to California for three months. They were looking for a taste of the good life on the Pacific, and at bars and parties they got talking to startup founders from Silicon Valley. They realised that what they had seen in Gross Borstel in Hamburg was a hot topic here too.

So they headed back to the banks of the Elbe with backpacks full of digital ideas for their own business.

Kuestner and Erdelmeier borrowed money from their parents and incorporated their business. Their version of the Palo Alto garage for Steve Jobs was a rented terraced house in Pinneberg. In their suburban "Valley", the two friends programmed day and night for months, developing a software-based assistance system for the MRO field. "It wasn't the most social time we ever had," laughs Daniel Erdelmeier. But it was worth the effort. Lufthansa Intercoat was their first client, followed soon after by Lufthansa Technik.

Meanwhile, they had received funding from Hamburg University of Technology's Startup Dock. Airbus noticed them and invited them to join the BizLab - "thanks, of course, to one of those incredibly embarassing application videos that we could be blackmailed with today," says Kuestner with a wink. The in-house Airbus sponsorship programme for young entrepreneurs is active in Hamburg, Toulouse and Bangalore and gives participants access to development departments, investors and specialist mentors in the course of a six-month "Accelerator" phase. Kuestner explains that they learnt how to make customer presentations during their time at BizLab, discovering "that it's not enough to head to negotiations with a few slides but no prototypes."

This led to the two partners more clearly dividing responsibilities. Today, Kuestner is responsible for managing the company while Erdelmeier provides the technical leadership. Their strengths are complementary. "I like going into detail and want to understand the process from the ground up," says Erdelmeier. "David, on the other hand, prefers to see the big picture and has a nose for trends." "We still make all the decisions jointly," adds Kuestner. "It's been working out well for three years, thanks to our balanced approach to conflict," he says with a grin.

The team has grown to include six employees, who are sometimes frightened by just how emotional the two founders can get in their discussions. "We call it 'early escalation'. If we don't put all our cards on the table straight away, there will be problems later on," says Kuestner with conviction. It is important to both of them to keep a firm grip on the rudder. An investor was interested in the Synergeticon idea quite early on. "But we wanted to develop the product with as little outside influence as possible," says Erdelmeier. "Now we can finance what we do entirely with customer projects." Kuestner nods with delight, adding, "And you have to stop and think about what that means: We are free to make all the decisions!" Airbus recently joined the list of customers.

So just how does Synergeticon's software work? "Our 'Sierra 2' platform can be configured for different customers. It retrieves the information it needs about the process step, for example from SAP orders, obtains values from connected measurement equipment, and provides immediate feedback to the user via the tablet," explains Daniel Erdelmeier. "VR glasses allow the user to view a component in 3D and inspect it from every angle. It has a 'digital twin', and for the first time the entire maintenance process for a component can be addressed." The team moved to the ZAL TechCenter at the start of 2017. Here, the duo have found that the "big" tenants are open to their innovation, and they can engage in useful dialog with other startups about the challenges common to young entrepreneurs. They also regularly converse with other members of the Hamburg Aviation Network, and cooperative projects have already started.

Their next aim is to win over the SMEs.  "The classical worker has completed an apprenticeship working very closely with the product - but not digitally," explains Erdelmeier. "That's where we come in, showing how the very last set of calipers can be digitalised and the process improved." Now is the time for SMEs to position themselves digitally before they are overtaken, adds Kuestner. But the whole topic of Industry 4.0 has to be addressed with sensitivity, especially here. "In the worst case, if the end user is not convinced or is perhaps even frightened of being made redundant by a digital 'colleague', it could result in a boycott of the system," he warns.

David Kuestner and Daniel Erdelmeier hardly have time to catch their breath. The order book for 2018 is already more than full, and they are hiring new staff. But they still find time and space for a shared hobby: Gliding is a chance to switch off. But even here they are still selling their business - Their teacher, Simon Bacher, has now joined the Synergeticon team.