Creative rooms with bean bags, an auditorium with cabin decor, colourful drawings on the walls - the Airbus BizLab is without doubt the cool counterpart to the parent company in Finkenwerder. And in the middle of it all, wearing a hoodie, sits Achim Leder, CEO of jetlite, on a sofa. If you want to get an idea of what the next generation of Hamburg's aviation companies looks like, this seems like a good place to start.

And indeed, this company founder and his young team of four quickly invoke images of a classic startup. His colleagues are all former students of the Jade University of Applied Sciences in Wilhelmshaven. Until recently, Achim Leder, 37 years old and with a PhD in economics, was there professor.  But it is important to him to be realistic with the fashionable "startup" label. "We are really business founders. Founding a business is cool, but it is also demanding - and "startup" sometimes implies a bit of an "if I don't come today, I'll come tomorrow" attitude. According to Leder, jetlite is about an airworthy product which will have a defining influence on future passenger comfort. After all, what sets jetlite apart from many small idea workshops is its sponsor: Airbus.

jetlite is based on the effect of light. It uses the technology developed for "mood lighting" which has a positive effect on those present. Today, in various forms, it is to be found in modern office lighting and in the home - and also, increasingly, in aviation. Finnair's Airbus A350, for example, is already equipped with projections of calming polar aurora lighting on the cabin ceiling. jetlite goes one step further on the basis of scientific research findings. A study carried out by Achim Leder proves that special blue light suprresses the production of melatonin, the so-called "sleep hormone". The targeted use of this light on long-haul flights is reduce disruption of the passenger's body clock. The idea behind jetlite is that this will allow passengers to feel fitter when they reach their destination. 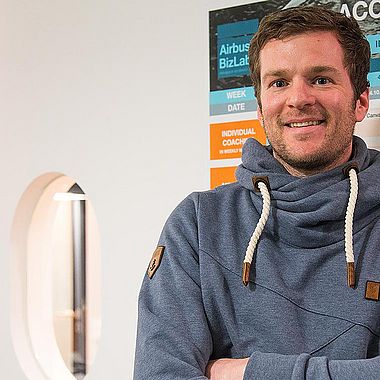 jetlite in the cabin

Light that minimises jetlag - Leder's gratitude for the business idea goes to - among other things - the light switches at his parents' home. "At home I used to switch on all the lights and my parents had to come along behind me to switch them off again. Light was always a big topic for me. I really can't stand it when rooms are poorly lit." He finds fluorescent lights, as seen in many kitchens even today, absolutely dreadful. "They are simply not on," he declares. Just as sensitive to light is Prof. Jarek Krajewski, occupational psychologist and Leder's doctoral supervisor. At a party, the professor told him about the scientifically proven effects of light on employee productivity. The party conversation developed into a research question: If light influences the biorhythm, can it also help us in one of the most well-known situations that disrupts our biorhythms: jetlag? Light that has an activating effect would need to be deployed at the right time on long-haul flights. Leder had a dissertation topic and pulled a team together.

They simulated long-haul flights with comprehensive tests where subjects spent ten hours at a time, three times over, in a mockup cabin. The test group was subject to lighting with a higher red level in the evening and higher blue level in the morning. They then went through the same route with normal cabin lighting. Here, the subjects quickly experienced typical jetlag symptoms. After the "flight" with jetlite, though, they slept more quickly and deeply and were more wide awake at the simulated arrival. Building on this concept, Leder and his team developed an algorithm to calculate the optimal lighting programme for various flight routes - and jetlite was born.

Osram, Airbus and the Fraunhofer Institute for Building Physics in Holzkirchen were convinced by the research idea and agreed to become partners. The infrastructure for the comprehensive tests was provided by Diehl. Achim Leder's many years of networking in Berlin gave him access to these aviation industry players. He started out as a student assistant in the Future Forum Berlin, one of the largest political platforms for aviation issues. He then worked as a lobbyist for EADS in Berlin, where his work included organising a trip for German parliamentarians to Toulouse for the A380 maiden flight. "The interesting thing is that to this day I have not once set foot in an A380. I haven't flown on one, and I haven't been on board at a trade fair. But who knows, maybe there's a reason I'm saving this experience up for later," he says with a wink.

After a stint with the Eurojet engine consortium in Munich, he returned to his roots with a leading sales position at Dortmund Airport. Aviation, says Leder, had held a great attraction for him since his childhood, and during the summer holidays his grandfather would take him to Düsseldorf Airport to watch the planes in action pretty much every other day. He would certainly have continued to enjoy his front row seat with a view of the runway if he had not seen the light, as it were: "Somehow, 2010 was a time for a new beginning, and I had the opportunity to do a doctorate."

In 2012 and 2013, the project team presented the findings it had been hoping for to its sponsor, Airbus - but unsuccessfully at first, because the aircraft manufacturer did not see any great relevance in the matter at the time. Leder completed his doctorate at University of Wuppertal and would probably have left it at that, if one of his talents had not meddled with his future. "Somehow I'm always the last to leave an event." He met Brigitte Zypries, the federal aerospace policy coordinator, at the opening of an exhibition in Berlin, and she personally invited him to present his idea at the Federal Ministry for Economic Affairs startup night; he did so, despite a high fever. There, he met Alexander Katzung, who was in charge of the Airbus BizLab in Hamburg at the time, and Rey Buckman, currently in charge - and he kept talking with them until the event came to an end. That was a key moment in the foundation of jetlite. At the start of 2016, after a successful application, Leder and his team moved to Finkenwerder.

BizLab is the Airbus 'Aerospace Accelerator' for young entrepreneurs, with facilities in Hamburg, Toulouse and Bangalore. It promotes innovative aerospace ideas and aims to support the next generation of the industry in making concepts market-ready. BizLab gives its participants access to departments and office space at Airbus and helps them establish contact with investors, mentors and legal advisers so that the teams can focus their efforts and concentration on fine-tuning their business models.  jetlite benefited in particular from the integration in the corporate structure, according to Leder. "As mundane as it may sound, sometimes just having an internal Airbus extension number is the key to making progress."

jetlite has now reached the "post-accelerator phase", which means it is still receiving support from Airbus. Its cabin lighting, meanwhile, has reached market-readiness. At the end of 2016, Leder submitted a proposal for his product to Airbus - a new pitch to the aircraft manufacturer in a completely new ball game. And jetlite is relocating to ZAL in April. Leder's goal for the next three years is to see all new A350 and A330 aircraft equipped with the effective LED lighting. Further, jetlite should serve as an integral concept for the entire "passenger journey", from the booking to arrival. A home economics expert who recently joined the team is now exploring dietary concepts optimised for flight times, for example. A jetlite app is to be another part of the product portfolio. It will provide behavioural advice aimed at jetlag reduction a few days before a long-haul flight and indicate when it would be sensible to sleep - effectively training the body for the journey. Awareness of biorhythms is a global trend, and jetlite wants to reap the benefits. "I probably just need to dress like a hipster, with a lumberjack shirt and horn-rimmed glasses and go to Alexanderplatz in Berlin and shout out 'Come and buy some jetlite from me'," says Leder with a laugh, acknowledging that his product is in tune with the spirit of the age - and at the same time, that it aims to make a permanent mark on the future of passenger comfort.