For those who know the industry, Krüger is synonymous with plastic. The parent company, established in 1920, was a pioneer of plastic processing and is a heavyweight of the segment. Since 2016, the Krüger Aviation subsidiary has been focussed exclusively on the field of aviation. The goal: to spread the fame of the Krüger name to the global aircraft cabin segment. Today's customers range from system vendors such as Diehl and Zodiac to OEMs such as Airbus and airlines like Lufthansa. The company's portfolio also includes mirror production, where Krüger Aviation is now world number 1. 60 percent of all mirrors installed in aircraft cabins now come from the company's plant in Barsbüttel, Hamburg. "Sometimes you have to stop and take a deep breath. It feels like the sort of fairytale that just doesn't happen any more," reflects Stoll as he relates the tale of the development of the small company.

The serviettes are green; the table decor is green; even Nils Stoll himself is wearing an appropriately coloured tie today. The apple green of Krüger Aviation's logo is more than just a corporate colour for the Barsbüttel firm, as quickly becomes clear in our conversation with the CEO. It is part of the new identity of the family company, which Stoll has managed jointly with the grandchildren of the founder, Arthur Krüger, since 2014. The young manager's enthusiasm for the development of the company is reflected in the spring in his every step as we walk through the factory. No less dynamic is  the self-made success story of this 37-year-old mechanic without a university education who has become the head of a global market leader. 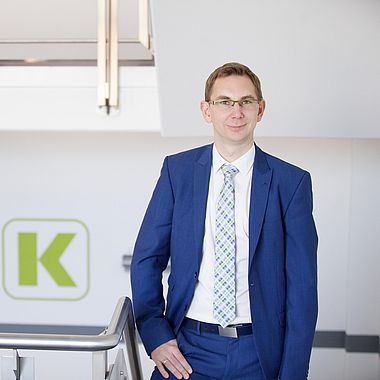 Indeed, the last eight years of the young CEO's career do read like a fairytale. Originally, the trained aircraft mechanic worked at Lufthansa Technik, where he specialised in rescue and safety systems. One day, he spontaneously and single-handedly put together a trade fair stand for Hamburg Airport Days - and got himself noticed by a high-ranking Lufthansa Technik manager. One thing led to another, and LHT offered him the chance to coordinate the setting up of a marketing section for the overhaul of cabin windows in the Philippines. He had exactly one weekend to prepare his application - and he quickly developed the required business plan, with the help of his mother-in-law, who had helped open Deutsche Bank branches in Asia. Nils Stoll got the job and travelled the world. "Apart from Greenland, I must have seen it all," he says. Cabin windows were joined by lighting strips, the sale of which later became his mainstay. His team won the 2014 Crystal Cabin Award for the "Guide U" proudct. "I have never celebrated like I did that night," says Stoll when he remembers one of his greatest milestones.

The unusual start in the world of sales culminated in a leading position in one of the most successcul product fields at Lufthansa Technik. From 2011 to 2013, he was also operative director of TBS Aviation, the manufacturing spin-off for the lighting strips.

1 of 40,000: Nils Stoll, CEO of Krüger Aviation and Vaulting trainer

Who are the 40,000 people who shape Germany's largest aerospace site? One of them is Nils Stoll - Vaulting Trainer and Managing Director of Krüger Aviation GmbH. What SMEs have to do with a riding stable in Hamburg/Kirchwerder, we show in our campaign kickoff. A collaboration with www.simonundpaul.com.

And then, in 2013, he dared to make the move to the Krüger family business. Perhaps because they were looking for just what Nils Stoll had perfected along his journey: the boldness to make a new beginning, even when it meant diving in at the deep end. The company heirs believed in him and put him in charge of the Aviation Division in 2014, allowing him to transform the company full throttle in the direction of aviation.

Nils Stoll, though, doesn't see himself as the sole author of Krüger Aviation GmbH's success. "The market has shown us that it wants what we have to offer. But the whole workforce is on fire for the aviation industry, and it has become a real team unit," says the manager with delight. Almost 1000 voluntary overtime hours for the Krüger workforce later, and the former attic of the Barsbüttel building had been transformed into the nerve centre of the new company. Nils Stoll renovated some of the building himself, working together with his employees. He scrubbed kitchens and then in the evenings he got the barbecue running for everyone. This was when the idea for the new colour came, too, in marked contrast to the parent company's bright red. "The green quickly became an emblem for the team," reiterates Stoll. A newly established "Innovation Centre" also contributed to the company's momentum. Students, apprentices and employees work together on innovative material applications here. The company's latest developments include a cabin mirror made of semi-transparent plastic, allowing for both passenger notifications and advertising to be superimposed. The mirror is on the shortlist for the 2017 Crystal Cabin Award. Krüger Aviation is also exploring the field of 3D printing and has been delivering printed cabin elements to various airlines since January 2017.

Krüger Aviation currently has 35 employees and an annual turnover of almost ten million euros. Diversity is fundamental for Stoll when it comes to the makeup of the team. Here, too, he has made some unusual decisions, he says. He deliberately chose a young father to be head of production, and they now swim laps together at 5:45 every morning. When one employee took maternity leave, he hired an unemployed sales professional to stand in for her - a 60-year-old whose seniority and experience was just what the company needed, according to Stoll. Another colleague is a top-level athlete in the equestrian vaulting discipline. Nils Stoll is also active in the equestrian field and met him at training. It's a colourful mix, "and it seems to work very well," says the young CEO as he looks at his employees in the factory hall - every one of them wearing a light green polo shirt. It's a matter of honour.