When we think of companies active in the aviation industry in Hamburg, we most likely think first of big hangars, heavy equipment, and the hive of activity that is the apron. Jens Romca's office, on the ground floor of an import-export office facing the old warehouse district, just doesn't fit into that picture. But the understatement of the offices of the 48-year-old and his partner, Jochen Müller, is matched by their towering presence on the international stage. The müller/romca studio has become one of the most high-profile industrial design outfits in the aviation industry.

Product designs coming from the müller/romca pen include the lavatory facilities in the Airbus A330, A340 and A380, Condor's Boeing 767 cabin, a Lufthansa 747 First Class cabin, and, their most recent major project, the newly introduced Lufthansa Premium Economy Class. The designers have also cashed in big time when it comes to awards, taking pretty much everything worth knowing about, from the Red Dot Design Award (most recently for the Lufthansa Premium Economy seat) to the Crystal Cabin Award.

ens Romca's aviation career began 25 years ago when he completed an internship in Finkenwerder. There, in the Airbus design department, he came into contact with the industry for the first time. He stayed on board throughout his studies at the University of Applied Sciences in Kiel with an industrial placement at Airbus. It was while studying that he got to know Jochen Müller. The two design students from Hamburg and Kiel hit it off from the start. They got on so well, that they set up shop together while they were still studying. Romca is keen to point out that this was most definitely not the result of careful planning. "We had won a couple of orders together, a bit of package design and some stuff for advertising agencies. And, well, suddenly there we were, self-employed," he says with a laugh of the birth of his company. 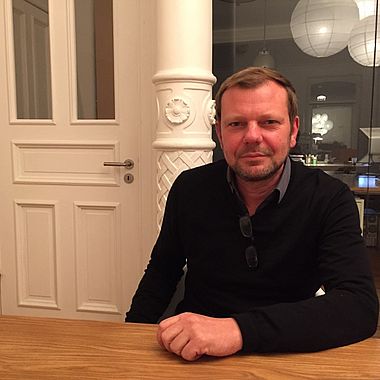 Whilst Jochen Müller has remained faithful to his hometown of Kiel, Romca returned to his roots in Hamburg some 15 years ago. Since then, they are active in both locations and in constant communication with one another. The team has grown to include three permanent employees and several freelancers. The Kiel office is somewhat larger and is also home to a mockup workshop. Whilst a computer is an indispensable tool for the professional designers, "only the real thing is really real," says Romca.

It took a couple of years before they returned to the aviation sector. Airbus developed the A340-600, with a special feature in the Economy cabin: lavatories located not only on the main deck but also on the lower deck. This was no easy task for the designers. "Normally, in a lavatory, you have less space at the top and more at the bottom. With the A340-600, it was the other way round," explains Romca. His old contacts made it possible for müller/romca to take part in the tender for the lavatories in the new long-haul aircraft. "I think they were assuming at the time that no one could do it. That was all the motivation we needed to get to work and seize the opportunity," the designer explains. "We set up camp at Airbus for two weeks, and in the end, we got the job. These toilets were a foot in the door for us."

With the A340 lavatory as a reference project, the designers then took part in the tender for designing the First Class lavatories in Lufthansa's new A380 flagship. Here, too, müller/romca won the bidding, just as they did in the redesign of First Class in the jumbo, where their concept for a seat with a separate, neighbouring bed won the day. As part of the redesign of their booking classes, Lufthansa is again replacing seats. This time, the new Premium Economy Class seats are being installed - another müller/romca design. The seats are manufactured by ZIM at Lake Contance, with the upholstery from Paustian Airtex, based at Sörup in Schleswig-Holstein. The choice of manufacturer, though, is made by the customer, not the designer.

The prestigious contract for the new booking class brought a good deal of attention to the small design studio.  And a lot of work, too: it took some 2½ years to go from the first designs to series production of the seat. "A seat is an even greater challenge than a lavatory," Romca confesses. "There are countless elements to consider in the smallest imaginable space: frame, cloth, upholstery, table, electronics, screen, life vest, cup-holder ... And it has to get certification and approval and look good into the bargain! On top of that, a project like this cannot be viewed from the passenger perspective alone. A cabin is at one and the same time also a workplace. An impractical, frustrating design - even if the problems are all behind the scenes - will be discarded very quickly."

The Premium Economy design was müller/romca's 15th project for Lufthansa. This makes the airline a major client in the aviation industry, but this is not really a head start. "There is no exclusivity here, and on an international scale we are, naturally, not the only good design studio out there. Sometimes we win, sometimes the others win," says the CEO philosophically. At present, about two thirds of turnover comes from aviation, with the rest in other segments ranging from a computer mouse to a trailer and even a high-speed ferry. Within aviation, around half of the client base is made up of airlines, with the other half consisting of suppliers such as the DIEHL Group, who have come to the studio for galleys as well as lavatories. They don't work directly with Airbus any more - not because of anything to do with the design studio, but because the manufacturer has restructured its supplier system.

Romca doesn't have a definite favorite project from all these years of work. "We get the best external feedback when products are relatively extravagant. But for me, the exciting thing about aviation design is the minimalism that defines this segment. It's the challenge of creating something aesthetically pleasing and comfortable in a very limited space!

"Of course, it is a nice feeling to know that you built a seat that is now flying all over the world," Romca adds. He hasn't sat on his Premium Economy seat in flight yet, but as the saying goes, there is a first time for everything. The greatest moment for Romca to date was being on board the delivery flight of an A380. "That was great. I was up above the clouds and using a urinal I had designed myself!"